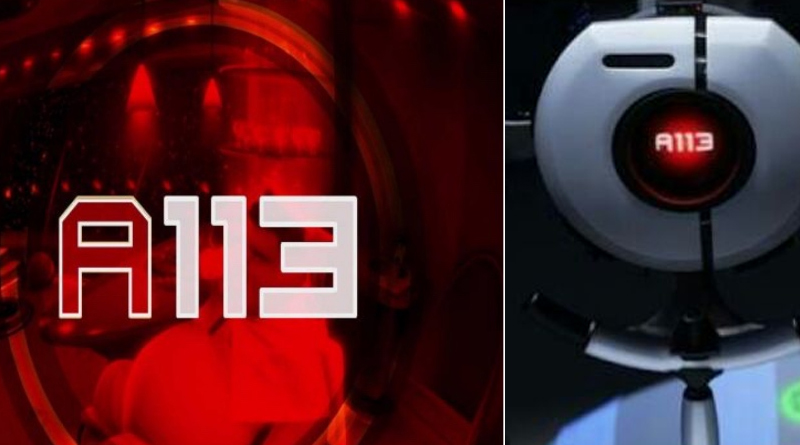 Ever wondered about the meaning behind A113 in your favorite family films? Here’s the low-down. You eagle-eyed movie buffs have probably spotted it before. It’s the infamous Disney A113.

Even Pixar fans will have spotted the A113 in a multitude of family films.

It’s Andy’s mom’s car in Toy Story. It’s the forbidden code that pops up plenty of times in Wall-E. It’s even on the camera the diver is carrying when he captures the lovable Nemo in Finding Nemo.

Pixar’s well known for its hidden messages in films. But, the best by far is the A113. In fact, a video on Disney Pixar’s YouTube page shows us that A113 can be found in just about all of their films.

A long time ago, before Pixar was a thing and John Lasseter was the John Lasseter, a mystical and magical classroom fostered animation hot stuff creators. That classroom was none other than Room A113, based at the California Institution of Arts. It’s here that filmmaking legends first dipped their creative toes and digital art tools into character animation and graphic design.

So, once John Lasseter eventually became the John Lasseter and Pixar was introduced into this world, the pupils in classroom A113 became animation superheroes and they remained true to their roots by honoring their humble beginnings with a hidden A113 in just about every Pixar and Disney film.


Pixar and Disney A113 Meaning

Now you know what A113 means, here’s another interesting tidbit: the code is said to have appeared in around 45 movies, cartoons, and even video games. It was director Brad Bird who was first to plant the homage to the classroom in his 1987 show, Amazing Stories.

A113 is one of those little things you really have to look for, according to John Lasseter (he’s chief creative officer at Pixar and Disney, by the way!).

A113 Disney and Where to Look

You and your family love Tiana, right? The beautiful character from Disney’s 2009 The Princess and a Frog jumps onto a trolley car during the film. That trolley car is marked A113.

We all have gone gaga for the Simpsons at some point, and even Bart’s mug shot was none other than A113.

The number even shows up on a door in the 1987 film, The Brave Little Toaster. You’ll also notice the number on Warner Bros.’ 1999 chewed up vehicle in The Iron Giant. This was another film directed by Brad Bird who later made Pixar’s big hit, The Incredibles.

Even some of the live-action films like the 2012 release of The Avengers had a file that’s labeled A113.

What About A113 in Pixar Flicks?

Pixar’s films are peppered with the number.

In A Bug’s Life, Flik discovers warrior bugs and you find an A113. In the hit release, Brave, if you zoom in and squint a certain kind of way, you’ll see the Roman numerals ACXII carved into the doorways’ interior at the witch’s hut. I know, it’s hard to miss now you know about!

How often have you and your family sat down to watch Cars? Watch it again this weekend and pay special attention to the minor locomotive that makes a quick appearance when Lightening is on the road towards Radiator Springs. Guess what? It’s the A113. Oh, and while you’re watching, take note of Mater’s license plate.

When you’re done binge-watching Cars, stick on The Incredibles and watch closely when Syndrome’s cell where the rocket’s being kept shows up. And, listen to Mirage when talking to Mr. Incredible about the 2 p.m. meeting – there’s mention of a certain famous number.

One of the newer films, Inside Out really denotes San Francisco with its Pixar-themed graffiti art – you’re probably getting the hang of this now – watch out for that graffiti.

If you like more of a conundrum, re-watch Monster’s Inc this weekend. There’s a Column A13 inside the vault door, making it an A and one 13, or, as you now know, A113. The number isn’t forgotten in Monster University, either, where there is the ultimate homage to Classroom A113 in the form of, well, Classroom A113.


Now you’ve got that trained eagle eye going, be sure to check out Ratatouille with the family and see who’s first to spot the subtle movie-within-a-movie reference. Need another reference? Watch closely for Git’s lab tag.

Toy Story, yup, all of them, are peppered with A113 references and in UP the courtroom is, that’s right, A113.

While many might stay away from anything referencing a 13, Pixar and Disney embrace it in the ultimate tribute to a classroom of animation geniuses.

Have you spotted A113 in any of your family films lately?